Skip to content
Date: January 16, 2017Author: paulinemartyn 0 Comments
Psychologist and theorist Csikszentmihalyi conducted decades of research to understand how certain pleasurable activities induced a phenomenon called “flow”, which he later defined as “a state of peak enjoyment, energetic focus, and creative concentration experienced by people engaged in adult play” (Csikszentmihalyi, 2000). As noted by Salen and Zimmerman (2004), flow is important to video games as it is precisely the feeling that game designers seek to elicit from the players. They further this point by remarking that “games are one of the best kinds of activities to produce flow”. How does Dark Souls fulfil this potential?
Dark Souls quickly establishes its unforgiving nature. The player starts with a small pool of health points and very little armour, a set-up made worse by the fact that encountered enemies can kill them with as little as two attacks. This feeling is further amplified when coming across level bosses, enemies who often dwarf the fragile player and deal devastating damage (figure 1). The character’s fragility even manifests itself in the player movement: the game makes it is easy to fall into holes, to run into a trap, or to approach a hidden enemy the wrong way, often resulting in immediate death. These mechanics serve to introduce a key element of flow that Csikszentmihalyi calls “the merging of action and awareness”. Indeed, Dark Souls requires the player’s full mental and, through the controls, physical attention to stay alive in the game. This single-mindedness manifests by the player being at one with the game: when dodging, the player does not consciously think of pressing a button to dodge, they simply think of the action, and reproduce it physically without a single thought; in Csikszentmihalyi’s words, “the action carries us forward as if by magic”. While this is common to most games, Dark Souls’ constant level of threat enhances this feeling and makes it even more vital for the player’s survival, thus starting the process of flow. 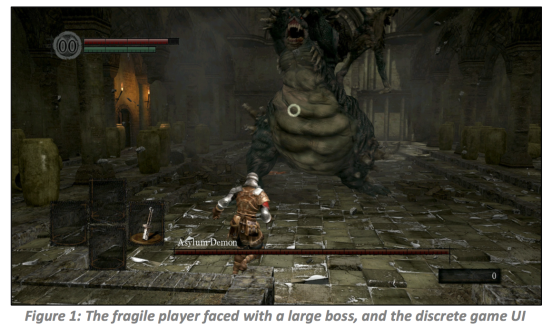 Early in the game, Dark Souls also tackles the challenge of “clear goals and feedback”, another of Csikszentmihalyi’s key requirements for flow. Games can be defined as computer programs made of rules, and their gameplay relies on creating understandable goals and feedback. However, as Baron (2012) points out, it should also be considered that “there are inherent limitations on how much information we can parse at any moment”. Dark Souls takes this into consideration and uses an interesting strategy to induce flow: making goals and feedback as simple and discrete as possible. In the first section of the game, the player is given one simple mission: find and ring two bells, and, quite simply, survive this mission. The player quickly realises that all the available areas in the game will lead them to the goal; reaching it is simply a case of moving forward. Furthermore, there are no given side quests, or even a quest menu. Feedback is given an equally minimalistic yet efficient treatment: in Dark Souls, every hit matters and results in your life bar diminishing, each amour can be tested immediately, each move costs stamina, a limited resource that can be depleted, and each leveling-up is indicated through numbers. If you fail, you die, and if you survive, you progress. Such is the vital feedback for the player, further exemplified in the bare but informative user interface (figure 1).

By its implementation of information, its ability to engage the player mentally and physically, and the single-mindedness its gameplay creates, Dark Souls therefore combines several of what Salen and Zimmerman (2004) call “flow activities”, helping trigger peak engagement from the player. Csikszentmihalyi labels this particular combination the “concentration on the task at hand”; he describes it as a state that induces the player to focus all their attention on the activity, leaving room from nothing else in their mind, be it their surroundings or everyday worries. Another logical consequence of this intense concentration is the phenomenon of losing track of time, or in Csikszentmihalyi’s words the “transformation of time”.

As the player’s concentration hits its peak and obscures time, their mind is now free to refine their in-game survival skills. In another application of flow, playing Dark Souls becomes “a challenging activity that requires skills”. As seen above, the player must survive against difficult odds by learning the necessary playing skills to progress. However, in order to be conducive to flow, the game’s learning curve must observe a very precise balance between challenge and skills (figure 2), following the principle that “in flow, the players are balanced between boredom and anxiety” (Csikszentmihalyi, 1997); when successful, this balance creates a flow channel or, as Chen (2006) also calls it, the flow zone. Interestingly, the wording of this chart is not innocent: as observed by Rogers (2014), the concept of difficulty promotes “pain and loss”, but challenge promotes “skill and improvement” instead, the latter offering a very different dynamic that is significantly more conducive to flow. Dark Souls places itself firmly in the challenge camp and avoids a pure difficulty approach with a key mechanic: reliable patterns. While very difficult to defeat, enemies and bosses all have unique patterns of attacks and timing, and regular attempts to defeat them allow the player to observe and memorise them. This gradual mastery helps the player build the skill they need to progress, and prevents prolonged anxiety as defeat always leads to an opportunity to better their skills, and the belief that this knowledge will eventually tip the balance in their favour. The game also avoids boredom by constantly introducing new enemies: their patterns are not known yet, but the player knows they can be. 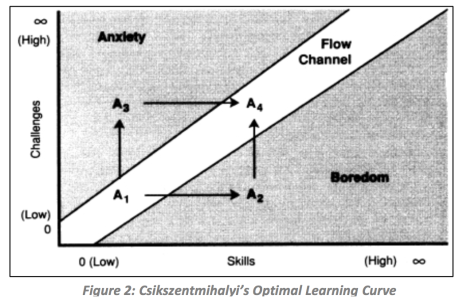 This gradual knowledge can also be linked to the “paradox of control”, which occurs when “players attempt to assert control by taking actions” (Salen and Zimmerman, 2004). In Dark Soul’s hostile world, where every step is dangerous, the world itself becomes an enemy; this is something that the player, a participant and not the maker, cannot change. However, Dark Souls once again finds an interesting solution to this design challenge with bonfires. Bonfires can be found throughout the game world and are kindled by the player; they remain dormant until the player activates them, and represent the only way a player can fully heal, replenish healing potions, level up, or, later on, travel quickly through the world. Importantly, these allow the player to establish an enclave of their own in the game where usual rules do not apply: enemies will not approach, healing occurs spontaneously, and, in a game where there is no pause button, the world can effectively be stopped for as long as the player wishes while they sit around the bonfire. By subverting its own rules with this mechanic, Dark Souls allow the player to assert control. It could be argued that the game offers another way for the player to assert control: memorisation. By memorising the game’s geography and enemy patterns, as seen previously, the player is also able to gain the upper hand on some of the game’s traps and challenges and gains a measure of control.

An interesting side-effect to the finely tuned challenge and to the way the play can exert some control in the world is the resulting “loss of self-consciousness”. Csikszentmihalyi explains that this occurs when “the self that the person reflects upon is not the same self that existed before the flow experience: it is now enriched by new skills and fresh achievements”. This can be taken almost literally for a game as demanding and yet rewarding as Dark Souls. Indeed, because its challenge curve through patterns is so well balanced, the player gains a strong sense of achievement as they progress through the game and learn patterns: they gain skills to defeat what were previously very challenging enemies; they memorise the world and avoid traps; they understand weapons and armour and how to use them efficiently; they assert some control in a previously totally hostile world. These constant rewards help the player reflect on their experience and create a positive feedback loop, further enhancing flow.

If Dark Souls achieves flow so well, however, why do some players not enjoy the experience or ever reach flow in the game? Salen and Zimmerman (2004) tackle that question by remarking that “there is no guarantee that the game you design will be put to use by players that are ready or able to experience flow”. Indeed, flow has an unpredictable human element, and as Chen (2006) notes: “like fingerprints, different people have different skills and Flow Zones”. Dark Souls’ tough but fair strategy may therefore make the game seem uncompromising to many players, who would conclude that the flow state is too difficult to reach. Conversely, this strategy is the key reason why other players reach perfect flow, which a less precise system may not have allowed for. It could be argued that the designers therefore decided to prioritise the few players who could reach perfect flow over the ones less susceptible of doing so.

Dark Souls successfully exemplifies all of Csikszentmihalyi’s elements of flow, and achieves them through varied and efficient means. However, it should also be noted that not all players will respond to this implementation of flow positively, as flow is strongly dependent on the individual.