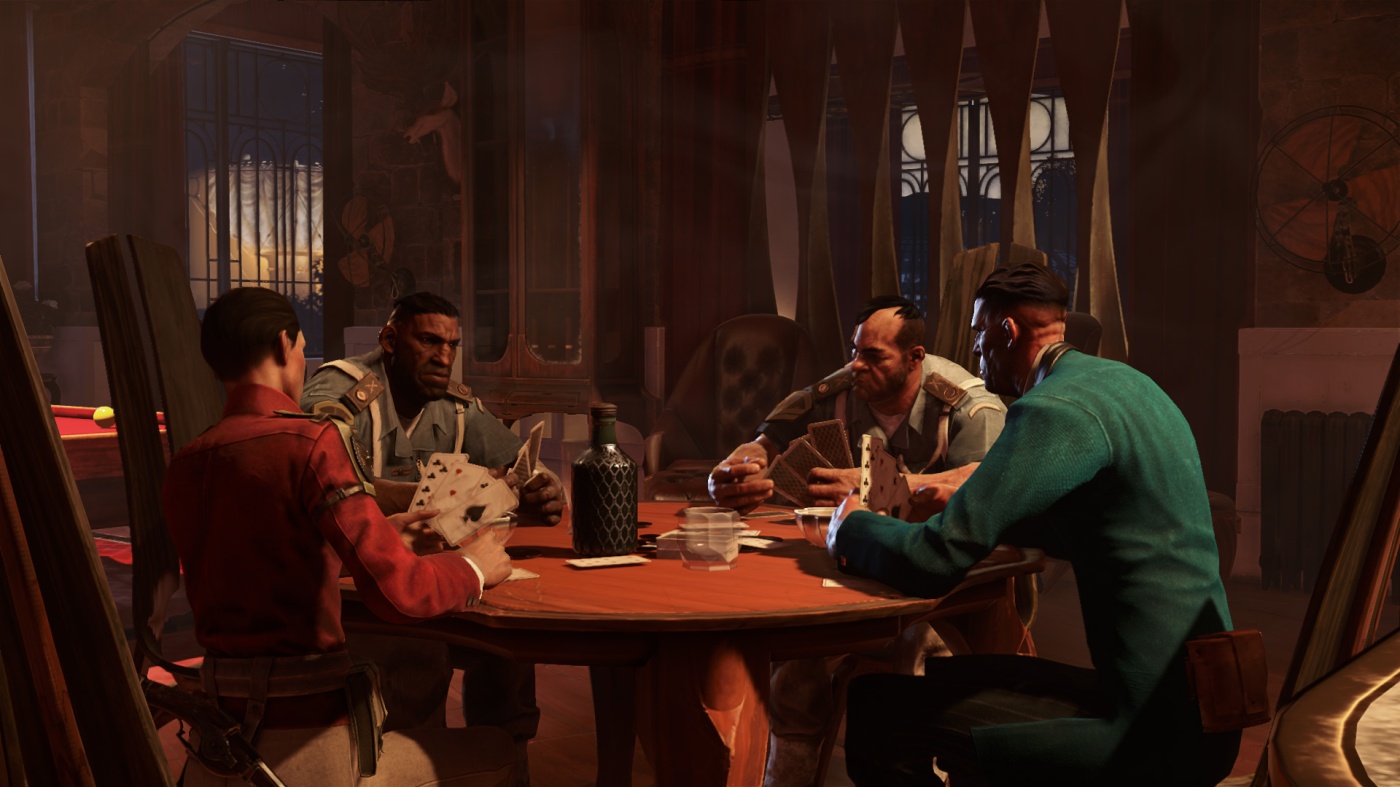 Realism in media can be defined as the link between a particular type of media and how it mirrors a form of reality (Glyndwr University, no date). Being both audio-visual and interactive, video games have an innate versatility with regards to representing realism, and can make use of several lenses to do so. This post will explore how Dishonored 2 (Arkane Studios, 2016) uses these lenses to create realism and engage with the player. It will firstly focus on sensory aspects of realism by examining the audio-visual landscape of the game, before exploring how mechanical elements such as rules and artificial intelligence behaviour create realistic-ness, another form of realism. The essay will then examine how the game world is used to invoke social realism in the player, before finally analysing how the personalisation of the game experience serves to further enhance its prism of realism through choice.

To assess whether a game is realistic, an initial question must be answered: what is realism in video games? For Adams, realism is “a continuous scale upon which the game’s relationship to the real world is measured” (Adams, 2014, p. 520), conveyed through game graphics and physics. This definition is echoed by Malliet, whose study participants are found to spontaneously talk about game realism as a matter of graphical realism (Malliet, 2007).

Graphical and physical fidelity is indeed omnipresent in Dishonored 2, a game built around three-dimensional environments mirroring reality in their design and behaviour. Urban environments display true to life architecture, texture, shapes, and colours (figure 1); in-game nature echoes this with elaborate weather effects and realistic flora. Humanoids, while sometimes stylised, also mirror their real-world counterparts in their overall design. To further enhance the sense of fidelity, life-like physics and collision also apply in Dishonored 2: space can be navigated, walls and obstacles cannot be passed, and gravity is present, while various objects can be picked-up, thrown, or broken.

However, there is more to game realism than audio-visual faithfulness. Focusing solely on these elements constitute what Salen and Zimmerman refer to as “immersive fallacy”, in other words “the belief that the pleasure of a media experience is the ability of that experience to transport the player into an illusory reality” (Salen and Zimmerman, 2004, p. 458). They argue that, instead, realism within a game must occur through “an engagement that happens through play itself” (Salen and Zimmerman, 2004, p. 451). How can this phenomenon be defined, and how does it apply to Dishonored 2?

Play, as defined by Zimmerman, is “the human effect of rules set in motion” (Zimmerman, 2009, p. 26); Adams makes a similar link between play and rules, defining rules as “instructions that dictate to the player how to play” (Adams, 2014, p. 521). Rules determine how a player progresses, what they can and cannot do in-game, but also determine the behaviour of in-game objects and non-player characters.

As highlighted by Frasca, behaviours are an important component to simulations: “[a simulation] does not simply retain the generally audiovisual-characteristics of the object but it also includes a model of its behaviours” (Frasca, 2003, p. 223); Malliet goes as far as arguing that this is the only way to determine realism, and states that “a simulation of a car engine is considered realistic not when it looks exactly like a real car engine, but when it behaves like a real car engine” (Malliet, 2007). If a game is to realistically simulate something or someone, behaviour, through rules, is therefore a factor that must be examined. This behavioural fidelity constitutes what Galloway calls “reaslistic-ness”, in other words a “yardstick held up to representation” (Galloway, 2014).

In Dishonored 2, realistic-ness is present in several in-game elements, but it is best represented by the characters’ behaviour and the rules behind it. Dishonored 2’s characters autonomously walk, talk, interact with each other, smoke, drink, play cards (figure 2), or interact with objects in the world; they can be seen reading signs, actioning water pumps, or looking at buildings and vistas. It is however in their interaction with the player that the characters show the full extent of their behavioural realistic-ness. Enemy guards, for instance, drastically change their behaviour as a result of the player’s actions: if they overhear the player walk or hit an object, they will walk in their direction to look for them, going as far as looking under tables if they cannot find them. While on alert, they will also call back-up, close and lock doors or windows, and turn on alarm systems. It is interesting to note that if the player reloads the game, guards’ behaviour will not always be the same, creating a sense of organic randomness that enhances realistic-ness. In-game civilians, similarly, will react to the player: they will run screaming if they spot the player carrying a corpse or sometimes alert guards if they spot other unlawful behaviour.

However, realistic-ness can also affect the game world at large; Galloway for instance argues that, in terms of realistic-ness, theorists must also discuss the game worlds in which the actions occur (Galloway, 2014). On this subject, Adams also notes that “a realistic game assumes that players can count on certain similarities between the real world and the game world” (Adams, 2014, p466). How does this occur within Dishonored 2?

Busselle and Bilandzic define the study of game worlds realism as as “game social realism”, which highlights “the extent of which the game content and game rules are consistent with the actual world” (Busselle and Bilandzic, 2008). This theory considers that realism goes beyond well-designed rules and consistent behaviour, and seeps into the experience and feel of the game world. This is furthered by Malliet who notes that, in order to achieve authenticity and realism in a game, a theorist should look, amongst other things, at “the social contracts that are possible within the game (i.e. what is being simulated in the game)” (Malliet, 2007).

As Ribbens notes, “because players believe the designers have created a coherent fictional environment, they judge the environment as being more realistic” (Ribbens, 2013). To achieve these goals, Dishonored 2 makes extensive use of its distinct historical setting, an alternate Victorian world set in the late 1800s. This is achieved through overall graphical fidelity but also through small details, all modelled on real Victorian equivalents: period-accurate adverts on the walls, criminal wanted notices, public event notices, and newspapers.

Beyond the simple historical accuracy, however, social commentary is an important part of game social realism; Galloway paraphrases cinematographer André Bazin saying that “[realism] also means real life in all its dirty details, hopeful desires and abysmal defeats” (Galloway, 2004). Dishonored 2 addresses this requirement by setting a very political and sinister tone to the game and to its narrative beats: a monarch has been overthrown, resulting in intense political turmoil that eventually turns the world into a totalitarian state. This has a direct consequence on the game world throughout the game: cities are increasingly deserted, curfews are enforced, chaos and criminal behaviour increases, and ruin and decay can be seen to slowly seep into the game world (figure 3).

Social realism can also be shown through more personal elements of the game world. On that subject, Galloway further defines social realist games as “those games that reflect critically on the minutia of everyday life, replete as it is with struggle, personal drama and injustice” (Galloway 2004). Dishonored 2 achieves this by making extensive use of civilian notes, letters and photos that can be found throughout the world, often telling very personal tales about characters within the game world, and, through a description of the hardships they experience, illustrating the harshness of the world they live in.

Beyond the game world there is, however, another way that games can exude emotions and make themselves more realistic to the player: the personal angle. Reporting on his studies Malliet notes that “not all participants had the same understanding of game realism. […] others associated realism with games that offer a real life-like experience or with games where the characters have human-like emotion” (Malliet, 2007). What is this link and how is it applied by Dishonored 2?

Towards a Personal Narrative

The link between realism and personal relevance has already been made in the study of media; Hall notes, for instance, that “something was considered realistic if the audience could either feel the character’s emotions or have an affective response to the character as they would to a real person” (Hall 2003 p. 635). However, video games, through their action-based interactions, can further enhance this phenomenon. As Malliet notes “games are often found to be more life-like the films, in the sense that players are offered a certain amount of freedom when it comes to making choices” (Malliet, 2007); he goes on by quoting one of his interviewees stating that “it is this freedom of choice that makes it appear realistic”, highlighting a clear link between the player’s choices and the sense of realism.

Dishonored 2 places the importance of choice and control early on in the game as, within the first hour, the player must chose between two playable characters to play the rest of the game (figure 4). This choice will have various effects throughout the game, each playable character prompting different reactions the game’s inhabitants and allowing different actions to be performed. As Sommerseth notes, “realism in games stems from the player’s experience of control over the game” (Sommerseth, 2007), making this an important factor for realism.

In Dishonored 2, however, the notion of choice is further embedded in the gameplay itself. All the way through the game, the player must choose whether to be stealthy or confrontational, and, more importantly, whether to kill or merely incapacitate everyone they meet; this mechanic is also applied to important characters in the game. These choices affect the endings and the future of the world, sometimes drastically, as well as the game world itself: violent actions will result in more enemies and in greater decay of the game world and its inhabitants, while a stealthier or less lethal approach will help pacify on the world at large. These constant and important player choices are an illustration of what Van Looy calls “introjection”, “the fact that, in contrast to more traditional forms of fiction, in video games players themselves inject themselves into the action by means of their avatar” (Van Looy, 2006). Konjin highlights a further link between in-game choices and player emotions by noting that “by involving oneself to a certain extent into the situations, characters, and events in a mediated with, the viewer may adopt the perspective of the media figure and may experience emotions through empathy, identification, or becoming emotionally involved” (Konjin, E, 2009).

It should be noted, however, that realism through choice may not be achieved universally. As Malliet notes in his study on game realism, “it was clear that not all gamers allow themselves to become involved in a game to the same degree” (Malliet, 2007), the difference being especially strong in games featuring ethical or ideological issues where “involvement is often a matter of individual choices of how much of one’s morality one decides to take into the game” (Malliet, 2007). Dishonored 2, where radically different choices can be made about the world and its inhabitants, may therefore not achieve realism with some players who chose not to engage with this type of realism.

Dishonored 2 achieves realism through various lenses. The game uses graphical, physical and auditory fidelity to instil a sense of realism, building on this with carefully designed rules and behaviours that add realistic-ness. Dishonored 2 also makes use of its game world and setting to add a socially realistic element to the game, communicated through visual and written materials. Finally, by allowing frequent and meaningful choices throughout the gameplay, Dishonored 2 triggers a sense of control and emotional investment with the player, making realism personal. It should be noted, however, that this mechanic will not have the same effect on all players, as players may not all choose to invest emotionally and morally in the game.