Through direct interactivity, computer games transform users into players, a premise that drastically affects narrative and story-telling (Skolnick, 2017). This allows players to sometimes assume the role the main character in a dramatic story, an experience that Mateas and Stern define as interactive drama (2006, p.648). To better understand the building blocks of interactive dramas, particularly in the context of computer games, Mateas and Stern (2006) have analysed and expanded on Murray’s Aesthetic Categories of Immersion, Agency, and Transformation (2001). This essay will use Mateas and Stern’s research to demonstrate how the video game Sunset (Tale of Tales, 2015) uses these three categories to develop an engaging interactive drama.

Emotional Immersion Through the Avatar

In Sunset, players assume the role of Angela, a housekeeper working for Gabriel, an unseen official in a civil-war torn country. Gameplay is divided into daily segments, each giving Angela several hours until sunset to do her housekeeping tasks before leaving.

Immersion in interactive drama is defined by Mateas and Stern as “the feeling of being present in another place and engaged in the action therein” (2006, p.649). Sunset achieves this by allowing players to directly embody the avatar of Angela in first-person view, a participative narration mechanic that is a key factor in immersion for Murray (2001, pp.112-113). The deliberate choice of first-person view also means that Angela’s appearance can only be seen when she stands near a reflective surface (figure 1), emphasising the fact that the player is in the action, and not an observer looking in.

Sunset further deepens this immersion with the use of comments spoken by Angela throughout the game (figure 2), triggered by looking at certain objects or by performing certain actions. These soundbites are frequent and often show emotion (frustration, worry, weariness), giving players insight into Angela’s thoughts and personality, and adding depth to her character. This is an important mechanic for immersion, as well-defined characters further belief in the illusory world (Murray, 2001, p119).

Freeman also notes that encouraging players to care about the world of the game through its characters is an important factor for immersion (2004, p.25). For Freeman, this can be done by creating emotionally complex relationships between the player and non-playable characters (2004, p.25), illustrated in Sunset by the relationship between Angela and Gabriel. As the days progress, players have the option of reading and responding to Gabriel’s notes, triggering an ongoing epistolary dialogue (figure 3). If this dialogue is sustained, Angela will be shown to display increasing empathy and concern for Ortega, building a relationship that can eventually become romantic. Doing so will also allow Angela access to additional in-game actions such as hiding sensitive documents or burning compromising photographs, a direct application of Freeman’s theory that “if a game prompts you to take responsibility for one or more of these NPCs, you’ll feel more willing to involve yourself in the world of the game” (2004, p.239).

As Murray highlights, “the more realised the immersive environment, the more active we want to be within it” (2001 p.126). Therefore, if Sunset succeeds at immersing players in the game, how does it achieve agency through player actions?

Duality of Agency in Sunset

For Murray, agency is the feeling of empowerment through actions taken in the game (2001), which is of particular relevance to interactive drama games (Mateas and Stern, 2006, p.650).

In Sunset, players can walk around and interact with several types of objects in the world. Some interactions are linked to the main narrative thread itself: a list of tasks is given at the start of each new day (figure 4), and by finding the relevant objects to action, players trigger key new information or tasks. Other objects, not specified in the list, can also provide further narrative rewards; playing the piano regularly, for instance, will trigger further notes from Ortega, as well as additional gameplay later in the game. For Adams, efficient agency allows players the option of changing elements in a game or story (2014, p.213), which Sunset achieves by using interactions to add (or withhold) narrative events and dialogues. 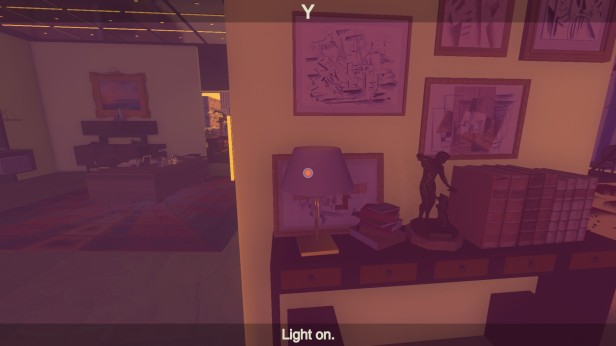 Other objects can be interacted with but do not yield any direct narrative rewards, such as a light and water fixtures. However, these interactions are colour coded (figures 5 and 6), and the game instructions (figure 7) state that in-game actions can be performed by choosing either a red (warm / romantic) or blue (cold / distant) option. Therefore, while they do not have any narrative immediate results, these interactions still trigger agency through player choice as “the [interaction] effect relates to the player’s intention” (Mateas and Stern, 2006, p.649).

Arguably, Sunset also approaches agency through a lack of action. Players can choose to ignore daily tasks, or, in fact, to forego any form of interaction, and still progress through the game; they can do so by simply waiting for time to pass or by pressing the elevator button (figure 8) to end the day. Indeed, while there is agency in taking action in the game, it could be argued that there is also agency in refusing to carry someone’s instructions and still progress through the game, albeit with less agency and narrative rewards.

Sunset therefore allows much of its gameplay to imbue the player with a sense of agency; what long-term effect does this have on the narrative?

For Murray (2001), a key feature of efficient interactive drama is to offer transformation through variety. Transformation occurs when players are able to explore different sides and plots of the game through “narratives which can be reentered multiple times so as to experience different sides of the story” (Mateas and Stern, 2006, p.657).

As noted above, player choices, through colour, affect almost every interaction in the game; furthermore, continued play reveals that repeated use of one colour over another eventually affects the in-game relationship and narrative. Red actions make the relationship with Gabriel veer towards the caring and romantic and yields specific dialogue (figure 9) and gameplay elements, while blue actions result in a relationship, and gameplay, that is barely existent by the end of the game. This enables players to experience a radically different narrative should they play again and reverse the trend they initially picked.

This also allows Sunset to fulfil the transformation condition that “small changes in the players choices early on result in experiencing a different unfolding plot” (Mateas and Stern, 2006, p.659). Indeed, in the first half of the game, players’ colour choices gradually set the tone for the rest of the game; by late-game events, while players can still make colour-coded choices, the narrative tone is already set and the player can only observe consequences of early game decisions. Indeed, in interactive drama transformation, “later choices have less effects on changing the whole story” (Mateas and Stern, 2006, p.659).

Building the narrative through constant interactions, by opposition to explicitly signposted choices, also means that, while the player can observe a general shift, it is impossible to pinpoint exactly when and where the tone changes. This fulfils Mateas and Stern’s condition for transformation that “change in the plot should not be traceable to instinct branch points” (2006, p. 659).

Sunset therefore allows transformation through choice-based narrative building, and give players the ability of experiencing different narratives from play to play.

While interactive drama techniques are efficiently implemented in Sunset, it is worth noting that they also have a significant barrier of entry: player engagement. Indeed, as Adams points out, “players who don’t like stories in games usually ignore these narrative moments” (Adams 2014, p. 214). In Sunset, players may chose to ignore any or all interactions, and choose instead to rush through the days via the escalator or time passing. As Salen and Zimmerman ask, “if one purpose of [narrative] elements is to provide information about the game world and settings, what happens when players skip over information?” (2004, p.411). In Sunset’s case, where the large majority of the plot and relationship is developed solely via in-game interactions, this will lead such players to miss most of the narrative and even gameplay, resulting in a content-poor and potentially disappointing experience.

Players engaged in Sunset may still face similar issues. Should they choose the cooler relationship tone, they will miss much of the available emotional immersion elements, only shown if Angela has warmer feelings towards Gabriel. In addition, players who choose not to replay the game, or who decide that one of the paths (romantic or cooler) is all they wish to pursue, will miss transformation elements.

As noted by Adams, “you cannot guarantee that the player will experience the most emotionally powerful resolution you feel that your story offers” (2014, p.236); due to the application of its interactive drama elements, Sunset may therefore fail to convey immersion, agency or transformation to some players.

Sunset fulfils Murray’s three key categories for efficient interactive drama. It uses a strongly written first-person avatar and complex relationships to create emotional immersion, and makes extensive use of its numerous and world interactions to create a sense of agency. Sunset also creates transformation through a myriad of small choices that gradually set the narrative tone, carefully avoiding obvious plot points and late-game changes and allowing for variety in replayability. However, it is worth noting that the efficiency of these interactive drama categories can be wholly missed by players who do not wish to engage with the interactions, or choose the path of least narrative rewards, and that, without replaying the game, players may not fully experience the transformative aspect of this interactive drama.